Queer Between The Covers is a new exhibition exploring over 250 years of Queer Literature. The exhibition in Convocation Hall, on the 4th floor of Senate House, displays 50 carefully selected works from the collection, showcasing works of satire, autographed manuscripts, illustrated novels and pulp fiction book designs, as well as rare editions of works by famous authors such as Oscar Wilde, WH Auden and Virginia Woolf.

I have been commissioned to create a series of book artworks using some of the books on display for inspiration to draw out the themes, tensions and celebrations of queer literary history.  I have drawn on aspects of historical persecution and oppression in the last 150 years to design and print books with a structure that accentuates the subjects covered in each book.  I wanted the books to be informative and reflective. The books will be delivered and installed by 27th January. In the meantime the exhibition will be displaying work-in-progress and the sketch book I used to record research and developmental ideas.

There is a seriousness to the experience suffered by Maud Allan and a playfulness to the antics of Djuna Barnes Turkish fold book. Oscar Wilde’s stitched concertina book weaves through ancient Greece and Victorian Britain.  Gay’s the Word book design celebrates collective action and solidarity, think of the bookshop in the film ‘Pride’ and you’ll be on the right track!

The Ladies Almanack by Djuna Barnes is one of the pieces I have chosen to explore. Reading Djuna Barnes for the first time is bewildering and amusing. The design of my artists’ book is informed by the way Barnes sold copies of the almanack on the inside of her cape in the streets of Paris, flinging her cape back to expose an array of beautifully printed ‘Chap Books’.”

There is also the autobiography of dancer Maud Allan, who sued for libel in 1918, after being accused of representing a German plot to send 47,000 gay men and women to Britain to seduce the population.

You can find the book art  on display outside the Chancellor’s Hall in Senate House, part of the University of London, located just by the British Museum.

Latest Edition is a Navigator North project in partnership with the Festival of Thrift.

Theresa Easton is just one project member of Latest Edition, exhibiting alongside Alex Sickling, Nick Kennedy, Carol Devey Haughton, Diane Watson & Becki Harper. Easton will be showing Reading Reel, a reference to the ethos of the Festival of Thrift, using recycled cable reels configured into an installation of artist’s books.

The exhibition will run until 17th March and is open 10am to 4pm Tuesday to Saturday.

‘Knowledge is Power’ refers to the woodblock used by radical publisher, Henry Hetherington on every copy of the newspaper the Poor Man’s Guardian.  Printed during the 1830’s, the Unstamped (illegal) weekly challenged the political consensus and contributed to the early stages of Chartism. 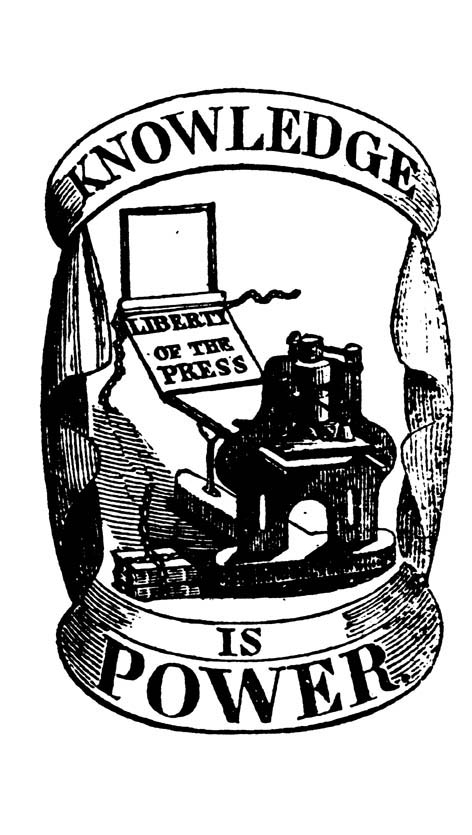 In this exhibition, Easton brings together a body of hand printed work exploring the empowering nature of printed matter.
With a strong Northern narrative, Easton questions political authority and presents an alternative mandate from the community.

Easton is part of The OTHER Great Exhibition of the North,
A group of artists, performers, community activists and musicians responding to the GEoN on a grass roots level.
The exhibition creates a space for community engagement by inviting community groups to  inform  the work being made with a hands on approach during the Ouseburn Festival opening weekend.

The Great Exhibition of the North,  a big showpiece event, is no substitute for proper funding of arts and culture.

Events like the Great Exhibition of The North (GEOTN) might have given the impression of a thriving creative landscape, but the reality is different.  The event was used to Artwash government policies of austerity and privatisation.  Years of cuts have left many communities across the country adrift and without the creative resources, community spaces and services which are vital in preserving and shaping our cultural identities

Community art Costs Less than War are a series of prints (photoetching & silk-screen)  touching on the Art Not Arms campaign initiated in March 2018 in response to the announcement of BAE Systems premier sponsorship of GEOTN.

The campaign successfully forced organisers to drop the controversial weapons maker and  arms supplier to the Saudi regime as a premier sponsor of the GEOTN.  This campaign launched The OTHER Great Exhibition of the North, by local community groups, artists, trade unionists and campaigners covering Newcastle, Tyneside, Durham, Sunderland & Teesside.

Art is a Powerful Tool celebrates the success of the Art not Arms campaign.  A series of prints (photoetching & silk-screen), the work references  icon northern industrial architecture and design with traditional broadside posters.
Exhibited at 36 Lime Street gallery, during the Ouseburn Festival weekend, the gallery was transformed into a studio for a week.
Young people and groups were invited in to create prints in response to the idea of artwashing and what art & culture mean to them.

In spring 2018 the Heritage Lottery Fund awarded The Portico Library a grant to catalogue its historic archives and share its discoveries. I was asked to work with the Portico to help them in their endeavour and in December, I will be exhibiting a series of art work that highlight stories from the collection, uncovering lesser known tales from the libraries archives.

I have spent a number of days exploring the archives and researching  subjects including newspapers in the late eighteenth and early nineteenth century.
I was particularly intrigued by the Newsroom at The Portico that was established when the library first formed in 1806.  The Newsroom housed a large collection of local, national and international newspapers and periodicals.  As a printmaker I have a natural interest in the origins  and role of printed matter, from the practical application of typesetting and the printers who created the newspapers to the political and social aspects of information, how it was shared, who controlled it and who had access to it.

The minute books from the collection, written in traditional handwritten script record the day to day running of the library.   Committee members over see the work of library employees, establish sub groups to deal with building works and newspaper & periodical subscriptions.  The minute books give a glimpse to the reoccurring themes and issues from lack of lighting, roofing issues and the needs of the Proprietors.